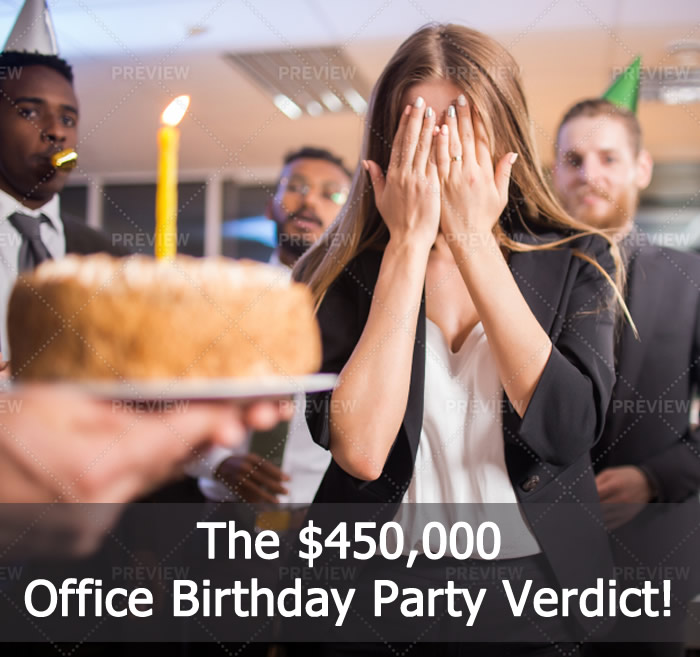 OK, we all heard about this one.  The question is – did you read beyond the headline?

As is so often the case, there was much more to the story than the attention-grabbing social media posts and late-night talk show hosts may have indicated.

The headline was usually something along the lines of “Did a Kentucky Man Sue His Employer for Throwing Him a Birthday Party?” or “Jury Awards $450,000 to Employee Who Declined Birthday Party.”

However, if the headline had read “Employer Sued for Failing to Make Reasonable Accommodation for Employee’s Anxiety Disorder,” the story would not have made any significant traction beyond the HR community.

While this story certainly does belong in the “No Good Deed Goes Unpunished” file, please continue to our blog so you will be prepared to provide all the details the next time it comes up at a social gathering.

Misunderstandings over an office birthday party recently taught a Kentucky employer an expensive lesson about disability discrimination. A jury awarded $450,000 to the affected employee who didn’t want the party and allegedly suffered a panic attack afterward. The employer’s alleged, repeated mishandling of the worker’s behavior after the episode offers the best explanation for the jury’s verdict.

Gravity Diagnostics hired Kevin Berling to work as an “accessioner” at its Covington, Kentucky, facility in October 2018. Accessioners organize and sort laboratory samples. His job also required him to enter data into a computer system.

Berling had long suffered from a diagnosed anxiety disorder. He experienced panic attacks, which caused him to hyperventilate, shake, and weep. Nevertheless, he had never experienced a panic attack while working at Gravity Diagnostics, until his office birthday party.

Gravity Diagnostics enjoys hosting birthday celebrations for employees. The company places each worker’s birthday on a calendar in the breakroom. It purchases a birthday cake for coworkers to share. Banners or balloons are hung to create an atmosphere of celebration!

On the Friday before his birthday, however, Berling informed his office manager that he preferred not to be honored with a party. He explained the celebration could trigger a panic attack.

Gravity Diagnostics inadvertently disregarded Berling’s request. His office surprised him the following week with a birthday celebration in the lunchroom. The party triggered a panic attack just as he had feared. He quickly left the lunchroom, in an attempt to control the attack and spent the remainder of the lunch break in his car. He messaged the office manager, upset because the company had failed to accommodate his request.

The following day Gravity Diagnostics management summoned Berling to a meeting. He alleges managers “confronted and criticized” his reaction to the birthday celebration. The office manager “started reading him the riot act and accused him of stealing other coworkers’ joy,” Berling’s attorney, Tony Bucher, explained to a local news media affiliate.

Management’s alleged treatment of Berling triggered another panic attack. He began using coping techniques he had learned in therapy, which included clenching his fists, announcing a “panic attack,” and asking others to “please stop talking.” The behavior caused the office manager to conclude Berling was going to strike her.

Once the panic attack subsided, Gravity Diagnostics management asked Berling to leave the building and sent him home for the remainder of the workweek. Then two days later, the company terminated his employment via e-mail “because of the events of the previous week.”

Berling sued Gravity Diagnostics for disability discrimination, failure to accommodate, and retaliation. He argued he “has suffered and is continuing to suffer from a loss of income and benefits and emotional distress and mental anxiety.”

Gravity Diagnostics’ defense included an accusation that Berling had violated the company’s workplace violence policy. His “actions, body language, and words” made management feel physically threatened and unsafe during their meeting with him over the birthday party incident.

The unwelcome office birthday party finally led to a two-day trial in Kenton County, Kentucky, in late March 2022. The jury found for Berling, concluding his anxiety disorder constitutes a disability under state law.

Accordingly, Gravity Diagnostics’ termination of Berling’s employment for behavior caused by his disability violated Kentucky’s prohibition against disability discrimination. The jury awarded $300,000 for emotional distress and $150,000 in lost wages. The employer is challenging the verdict.

Berling and Gravity Diagnostics may have both been guilty of overreacting. Yet, the jury found a significant difference between them: The employee had a medical diagnosis justifying his response.

Nevertheless, once an employee attributes behavior to a disability, legal safety requires a careful response. If a disability’s existence or impact is uncertain, you must rely on medical or psychological advice, not you own assumptions.

After all, resisting the temptation to seek a quick solution to what may be a complex problem may save big money, lots of trouble, and public embarrassment when a jury is asked to second-guess the wisdom, legality, and propriety of your employment decisions.