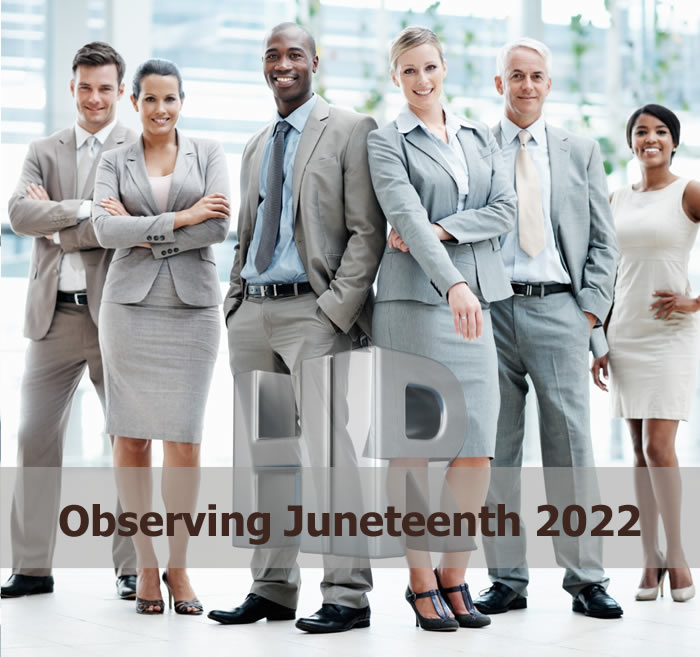 On June 17, 2021, President Joe Biden signed a bill recognizing Juneteenth, the celebration to commemorate the end of slavery in the U.S., as a federal holiday. It became the first new national holiday since the creation of Martin Luther King Jr. Day in 1983.

This year will be the first time many employers will observe the holiday.  Employers Group/EverythingHR offices will be closed, as will those of the federal government and an increasing number of private employers.

Forty-nine states and the District of Columbia have passed legislation recognizing Juneteenth as a holiday or an observance.  Texas was the first state to make it a state holiday back in 1980.

For a thoughtful perspective on the meaning of the holiday and its importance to employers, please continue to our blog.

What Employers Should Know about Juneteenth, America’s Newest National Holiday

Holidays are a reflection of our collective values. As a society, we hope they signal what—and sometimes whom—we as a nation should commemorate. Today we celebrate Juneteenth, collectively recognizing the official end of slavery in the United States.

How We Got Here

Almost 130 years ago, our nation began celebrating Labor Day, which recognizes laborers’ works and contributions to the country’s development. More recently, in 1983, President Ronald Reagan signed a bill to add MLK Day as a national holiday in honor of the late Dr. Martin Luther King Jr.’s contributions to the civil rights movement.

Often lost in many discussions about MLK Day is the fact that the journey to create the holiday—which began just four days after King’s assassination in 1968—took 15 years to establish. Despite the designation, the day wasn’t observed officially until 1986. Even then, it still took nearly two more decades before all 50 states recognized the holiday.

In the summer of 2020, America was ensnared in a social and racial reckoning unlike any seen in recent history. Despite the uncertainty, the year proved to be a time of immense growth and necessary vulnerability. Ultimately, it served as a resounding rallying call to simply do the right thing. For what seemed like the first time in a long while, people were inspired to change their perceptions, and the world was challenged to prioritize understanding over judgment, including the timely creation of a new federal holiday.

On June 19, 1865, Major General Gordon Granger issued General Order No. 3 in Galveston, Texas, announcing “all slaves are free” in accordance with the Emancipation Proclamation (issued some three years earlier). In 2021, 156 years later, America memorialized the important milestone. For the first time, Juneteenth was observed as an official federal holiday. For reference, only four new holidays have been added to the national calendar in the past 100 years.

Fortunately, much has changed since the difficult road to honor Dr. King’s momentous legacy. Much of the work and healing leading up to Juneteenth’s observance, however, was expedited by the racial and socioeconomic disparities amplified by last year’s events. This significant accomplishment should serve as a reminder that our commitment to build a truly equal and equitable nation is just that: a commitment.

In a time when corporate initiatives and well-intentioned pledges to support diversity, equity, and inclusion (DEI) are the norm, these public displays of solidarity generally have an expiration date; they are not easily sustainable. The main focus of these efforts should not be on the acts themselves, but the long-term impact they will have on those within an organization’s sphere of influence. Our newest holiday should be a constant reminder that our responsibility to be kind to one another never ceases. In fact, kindness may be the most important charge we have as human beings.

As a U.S. citizen, military veteran, and African American, I am proud of the progress we have achieved in just over a year. Nevertheless, reflection serves as a reminder that we as a country still have far to go. Allies are still needed in spaces where the voices of diverse communities historically have not been heard.

Until we all advocate in some capacity against overt, systemic, and subconscious injustices, we will all suffer as a result. The annual observance of Juneteenth can and should be the constant spark that ignites a renewed American spirit, and I am hopeful for the change and growth it will undoubtedly bring.