Flexible Work Arrangements – A Great Option That Comes with Some Cautions 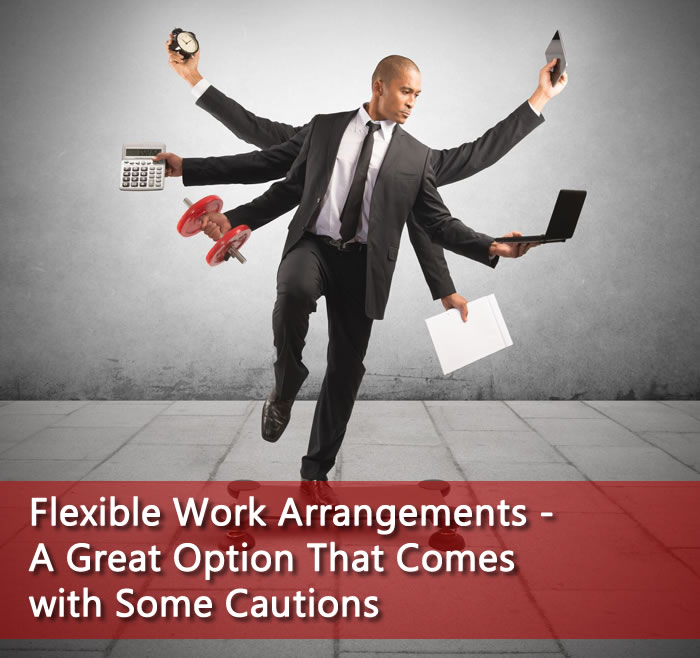 There is not an HR professional anywhere that does not clearly recognize that the expression “no good deed goes unpunished” was conjured up to apply exclusively to the challenges of employment practices.  Oh sure, it is always difficult to ensure that the entire workforce is completely in line with every single federal and state labor law in existence, but that pales in comparison to the never-ending saga that is employee relations.

The last few years have exacerbated this in so many ways, certainly not the least of which is engaging in the interactive process when a possible resolution (short term or long term) might be a flexible work arrangement.

What seems so easy and so logical, is actually fraught with many unforeseeable possibilities.  Thinking this through and having a carefully-constructed plan is always critical.

For a detailed overview of the challenges that can come from offering flexible work arrangements and some common sense guidance for how to make them work, please continue to our blog.

Watch Out for Scope Creep in Flexible Work Arrangements

Despite best intentions and nondiscriminatory business motivations, some groups of employees may reap more of the benefits of flexible work arrangements than others simply because their circumstances make such options more attractive to them. Accordingly, you should take steps to ensure flexible work arrangements are offered and implemented without discrimination on any prohibited basis.

In offering flexible work arrangements, you should consider employees’ unique, real needs and wants while also taking measures to ensure the arrangements don’t create a second class of employees that results in unlawful disparate treatment or disparate impact discrimination. As with all other employment practices, consistent and careful documentation, consistent decision-making practices, and clear policies are critical to fend off possible discrimination charges and to prevent flexible work arrangement scope creep from occurring.

The arrangements are more likely to be successful when viewed as a mutually beneficial business process. The employer and the employee should ensure a mutual understanding is reached over when, where, and how work is done. The determination should include a fundamental change in approach and underlying assumptions in meeting each employee’s wants and needs, regardless of whether the flexibility desired is for a reasonable accommodation under the ADA.

What is Scope Creep?

Generally, scope creep occurs in the context of project management when clients add new requirements after the project execution has started. It results in changes made to the project scope without any control procedure, such as documented change requests.

Consider this ADA example: An employee, Jan, tells her supervisor she is having trouble getting to work at her scheduled start time on Fridays because of medical treatments she is routinely undergoing on Friday mornings. She requests the ability to make up for that missed time by working later at the tail end of her shift.

Having little impact on the workplace or fellow employees, her employer determines no undue hardship would be created and approves this reasonable accommodation. Jan’s situation implicates the ADA and should be handled in an official, documented manner. If a change or expansion in scope to the accommodation is made later, the employer can further the interactive process with reference to the original scope as documented.

Compare Jan’s accommodation to Rex’s flexible work arrangement: Rex, who moonlights as a musician, requests to leave work for a couple of hours during the middle of the day each Wednesday to practice with his bandmates. He asks his manager if he may do so on the condition that he catches up by staying for two hours on Wednesday evening after regular business hours. His employer is embracing flexible work arrangements and grants the request but doesn’t document the arrangement.

After a couple of months, Rex’s band becomes very popular, and they start to practice on Mondays and Thursdays. The practices begin an hour before he is off work. Considering the flexibility he had been afforded with his Wednesday schedule work arrangement, he believes he could further flex his work hours to allow for the Monday and Thursday practices as well. But, in time, he begins missing client meetings on Mondays and Thursdays because of the scope creep in his flexible work arrangement. His initial arrangement wasn’t documented, and now his employer is frustrated with him for missing an important Thursday afternoon client meeting. Consequently, the employer advises him he can no longer miss work during business hours.

Rex’s coworker Kate had also worked out a flexible arrangement with their employer when she couldn’t find childcare for her two children on Fridays. She asked her supervisor if she could work each Friday remotely, which her supervisor approved. The interaction is documented via e-mail between Kate and her supervisor.

Kate begins working remotely more and more, however, without communicating further requests to her supervisor, even though she has childcare on the other days, and eventually ends up only coming into her office two to three times a week. Unfortunately, her productivity also gradually declines, which her supervisor recognizes. With documentation of an express agreement for remote work on Fridays only, the supervisor is easily able to communicate with her about the arrangement. She retracts from the scope creep and returns to her remote work arrangement being Fridays only, which helps her get back on track with her key responsibilities and productivity potential.

You know the old saying, “If it isn’t documented, it didn’t happen.” Foresight should be the new hindsight for best protection. Record keeping should be initiated as soon as the request is made or otherwise brought to your attention and should continue throughout an employee’s tenure. Even a verbal arrangement should be documented. Remember though, documentation isn’t just for your protection. It should also be used to communicate with the requesting employee.

Engaging in an interactive process for employee problems or barriers arising under disabilities or for other reasons increases worker productivity, reduces employer liability, and will aid with the buy-in of employees in a plan that works best for you both. When an employee is reaping the benefits of a flexible work arrangement, communication and documentation are essential to avoid any impermissible or unknown scope creep or discrimination from occurring.